How To Tincture Herbs With the Folk Method 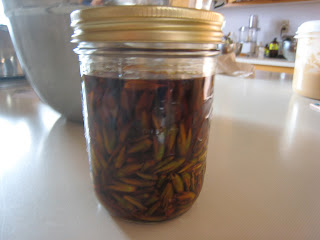 People are often confused about how to make herbal tinctures using the "formula" or "calculation"  or  "weight to volume" method that I teach in my book. I give very detailed directions and these directions will result in a very precise product. However, if you are not making tinctures to sell, you can fudge a bit and do not have to be so precise.  For those of you who do not like the math or are confused, I suggest trying the folk method in the beginning. This involves no math and makes the process very easy. Once you have used the folk method and feel confident, you can go on to using the formula method of extraction if you want to be more consistent and precise in your herbal tincture making.  I suggest you read this in its entirety before beginning as the tips on type of alcohol and water content in plants might change how you approach your project.

The Type of Alcohol You Use Is Important

In the pure folk method of tincturing herbs, people often use whatever hard liquor they have around. When I make a tincture using the folk method, I usually use organic grain alcohol which is 95% alcohol strength and has no flavor. (I don't like to support GMO derived alcohol.) However, people can use whatever they have as long as it is something that is 80 proof or 40% alcohol such as vodka. This will generally ensure enough alcohol to preserve the product and extract most of the constituents desired.

The "Folk Method" does not calculate for the percent of alcohol used. Some plants are better extracted with a higher amount of alcohol such as resinous herbs, and there may be a concern about having a high enough alcohol strength to extract the resin or other materials. If you know your herb should have more alcohol used to extract it you can use 95% alcohol  found in the liquor store. I purchase organic alcohol from Organic Alcohol Co.

There is nothing precise about this method, so forget using it if this is going to bother you. There are also some times where it is best not to use the folk method. We will cover this at the end.

Adding the Alcohol and Herb

Start by filling a jar about 1/3 -1/2 full with fresh or dried
plant material. Pour alcohol over the top of the herbs. Please realize that dry herbs will really soak up the alcohol so you may need to add extra liquid later. You can check the next day to see if you need to add more alcohol. The alcohol must stay over the top of the plant by at least 1/4 inch at all times to keep it from oxidizing. If you are making a tincture with a fresh plant rather than a dry plant, you won't need to add more alcohol later. This is due to the water content in the fresh plant. In the case of the dry plant extract, the plant material will suck alcohol into its dry cells. So you will have to add more alcohol later.  If you are adding alcohol to dry plant, you will definitely need to check it the next day to see how much more alcohol needs to be added to it.

Blenderize Your Herb and Alcohol

Now in its simplest form, you don't even use a blender to mix the herb and alcohol. You just pour the alcohol over the herb, shake it off and on and wait. However, most people using this method will use a blender to mix the alcohol and the herb together. This breaks up the plant into smaller particles and lets the alcohol get absorbed into the plant quicker and allows it to come into contact with more plant material, thereby extracting more of the goodness from the plant. This can also be accomplished with a mortar and pestle. It is just much slower than a blender, but does give you a good work-out.

You have a choice of purchasing whole dry herb or cut and sift herb. For many herbs, whole form is best to purchase as the more it was cut up and pulverized, the more oxidized the herb becomes while sitting on the store shelf. Being oxidized means it will loose its healing powers quicker. Some plant roots or barks can be so hard that you can not cut them up yourself, so in these cases using whole plant might just exasperate you. If you do find yourself with some tough roots or bark, I suggest you pre-soak them in alcohol to allow them to soften up before trying to blend them. (I once had to soak a root for months to soften it up before blending it.) Otherwise you might break your blender.

Let It Extract And Then Press It Out

Once your herb and liquid are mixed together, and there is adequate liquid (at least 1/4-1/2" above the plant material) to keep the herb from oxidizing in the air, put a lid on the container and steep for 4 to 6 weeks in a cool, dark place such as a pantry or closet. Shake it often. Then strain or press out the liquid or menstruum. You can press it with  a potato ricer or by using a strainer, cloth and some muscle power.

Usually in the folk method you don't even bother filtering the tincture after it is strained. You simply use as is.  This is really all there is to the folk method. In many cases this will work just fine. If you want it filtered, let it sit for 24 hours or more to settle out some of the debris, then decant it off, leaving the debris behind and pour the liquid through a filter in your kitchen such as a non-bleached coffee filter.

The folk method is best used to extract dried plant materials. As I mentioned previously, people usually use an alcohol such as Vodka when using the folk method. Fresh plants have moisture in them and as soon as you mix the fresh plant with the alcohol, you are diluting the alcohol. If the plant has 75% moisture in it, you are diluting the alcohol a lot. For this situation, a 190 proof or 95% alcohol is really a better choice.  Fresh plants that have little moisture content or fresh plants that have constituents in them that you can extract with low amounts of alcohol will do well with the folk method and using an alcohol like vodka that has 40-45% alcohol.

When you want to use this method with dry plant material that needs high amounts of alcohol, I would again suggest using 190 proof (95%) alcohol. Doing this will allow you to get a good extraction from plant material  such as resins. Another situation necessitating 95% alcohol is when the plant being tinctured is fresh and it has a high moisture content and/or has constituents that necessitate a moderate to high amount of alcohol to extract them. Yet another situation would be when you want to make a fresh plant tincture stronger by extracting additional plant material in the menstruum. This makes the final product stronger and necessitates more explanation than I am going to go into here.

Reasons I often don't use the Folk Method

• This method does not allow me to know the strength of my product.

• Lack of consistency in my products & not being sure about how much to give since I don't know the strength.

• This method can lead to an alcohol strength that is too little or too much which can lead to inadequate extraction as well as excessive, unnecessary alcohol in a product. 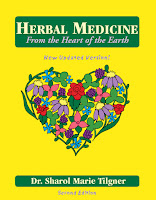 This method is also called the formula or calculation method. It is much more tedious, has extensive directions, and yes it does involve math. You will find these directions in my book "Herbal Medicine from the Heart of the Earth". You can also look for an herbalist living in your area that teaches classes on how to make herbal tinctures. Getting hands on experience is really the best thing when learning how to make herbal products.