It is winter and time to think about digging up medicinal roots. This year I am in need of a variety of roots such as Elecampane, Echinacea, Valerian and Bloodroot.


When to Harvest Roots
Where I live in the Pacific NW of the United States these roots should be harvested from around the end of November to the end of February. The basic idea is to harvest them after the herbaceous plant material has died back, but before the new greens start growing again. This way you make sure all of their energy is in their roots and not involved in making leaves and flowers.

All of the roots I plan to harvest are from perennial (live more than 2 years) plants. They will all be around two - three years old when I harvest them. It is rare that annual (live 1 year) plants are used for their roots. If I was collecting roots from a biennial (live two years) plant I would need to be sure I harvested it at the end of the first year prior to it starting to grow in the second year. This is because the plant will die after the second season. The root will not be any good to harvest at that point.

Gnarly Roots
The next thing to consider is how the years take their toll on the roots. Just as some of us people get old and gnarly, so do some plant roots. When they get old and gnarly, they become quite fibrous and they don't have much meat on them any more. This means for some plants such as Elecampane you want to harvest it at the end of the first or second year. After the second year you can still harvest it, but each year it gets woodier and there is less useful material on the root. I say, why bother. Just use a younger one. This woodiness seems to take place on most of the medicinal herbs with tap like roots. This especially happens to the larger ones. Good examples would be Elecampane and Poke root which can get really woody over time.

Echinacea, Valerian and Bloodroot are different. They don't get woody like the Elecampane does. They may get a little bit of woodiness, but nothing that is bothersome. I like to harvest them all around their 3rd year so they get big enough to be worthwhile to harvest.  If you have really good soil these herbs may be harvested at the end of the second year.

Valerian As An Example 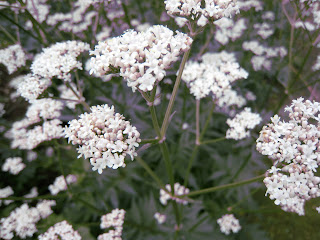 Let's use a well known medicinal herb like Valerian as an example of how to harvest a root. It grows great in the Pacific NW. I will be digging up a commonly grown species called Valeriana officinalis. There are other wild types of Valerian but this is what is usually grown in most gardens or on farms.

The first thing I need to do is decide how much root I will be harvesting. This depends on my use of it for the coming year. I usually tincture the fresh root and then add some dried root in towards the end of the tincturing process. I will get what I think I need to make enough tincture to last for the next couple of years. Then I need to decide when to harvest. I don't want to dig in frozen ground. I also prefer not to dig in really wet soil as the roots will be encased in a ball of mud if the ground is real wet. I pick an easy to dig day and dig up the amount I need. The tincture method I use involves tincturing fresh plant. It will go through the menstruum (alcohol & water used to extract it) twice. This means I will dig up half the root I need now  and half the root I need in about a month or two. I want 10 pounds of fresh root. So I dig up 5 pounds now for tincture and another 5 pounds in a month or two. I will also dig up another 2  pounds now t0 dry into 1/2 pound for the dry Valerian I will add later towards the end of the tincturing process.

The roots are very dirty, I shake off as much dirt as I can back into the hole I just dug.

The next thing I have to do is wash it off. Brrr. it is cold out washing roots this time of year. Valerian is hard to clean also. It holds little rocks deep inside its tendril like legs. I spray them with an outdoor hose and then take them inside where I carefully clean them in the sink. I don't want any rocks or dirt left in. Even though the alcohol I use will kill any bacteria on the root, I still don't like dirty roots and the rocks could destroy the blades in my blender.

Once clean, I need to cut the roots up. With most herbaceous plant roots, I cut everything up that is not woody. It is all useful. I need them in blender sized pieces for tincture. Many of the Valerian roots can go in whole or just cut in half if small enough. Usually, with Valerian you have to clean it so good that you already cut it up small enough for the blender while cleaning.  For the ones I am drying, I cut them up into smaller pieces. How small I cut roots depends on a few factors. If the root is easy to crush or cut up after drying I only need to cut it small enough to dry quickly. However, if a root is stone hard once it dries, I have to cut it to the size I need while it is still fresh. The ultimate use of the root is another factor in how small I cut the roots. Lastly, how difficult it is to dry is another factor. A nutritious root like comfrey tends to grow mold on it if it is not cut thinly or small and dried quickly.  With Valerian root, I just chunk up the upper part and don't worry about the small roots. They are thin and dry quickly in my food dryer or by my wood stove.

Now we move on to making the tincture and drying the roots, but that is another blog in the future. If you are seriously interested in collecting roots, I will share some photos from the echinacea  root harvesting/tincturing of my "Becoming An Herbalist" class that will take place in February. I will also share photos of some of the other various roots we harvest then as well as information on echinacea and how to make a tincture in upcoming blogs. If you want to get your hands on some herbs and learn how to be an herbalist, join us in this 9 month class.